For sports fans, March Madness is an event like no other. It’s where the top 64+ teams in college basketball (NCAA Division I) get together to play a win-or-go-home single elimination tournament. The format lends itself to upsets, and having the games on overlapping time periods makes it exciting to flip between games and catch the ones coming down to the wire.

Every year I try to set aside some time in March (and early April) to follow the tournament, and like millions of other people I join a pool and make a totally uninformed guess at how the games will play out. Other than the tournament, I don’t really follow the NCAA. I follow the NBA. Every year I wonder why the NBA doesn’t get in on the action. There are a lot of obstacles to an NBA March Madness, which has probably precluded taking up the idea seriously. But never fear – I’ve now figured them all out and am ready to present my comprehensive solution below, totally free of charge (Except for my share of broadcasting revenue, that is…). Let’s dig into those problems and my proposed solutions.

#1 How do you make teams want to participate?

Are teams really going to risk injuring their players in extra games? Is this happening in March, in the closing stretch of the season? How do we reward the teams?

It’s not actually March Madness – it’s November Madness. Do it to start the season, before we really know how good any teams are.

Here’s the big trick to making the teams try: Make the games count. Every win counts as a win in your record, and losing creates a loss. In any game your incentive is to win.

In later points I’ll explain how I make this work with the schedule, and a secondary benefit to winning.

This is true. But you know what it does have? 30 teams. Give the NBA finalists from the prior year a bye, and now a try can be made that’s just a round shorter than the NCAA.

That’s the fun part. Here’s one idea I really like: in each conference, order the teams by their playoff finish and then by their standing. Then, swap every second seed in each conference with the other. So Houston, by virtue of making it to the Western Conference finals, swaps with Atlanta, who lost in the East finals. Now we get to watch match-ups that we rarely see, while also doing something about conference imbalance. Here’s what this would look like based on the 2014-15 NBA season: 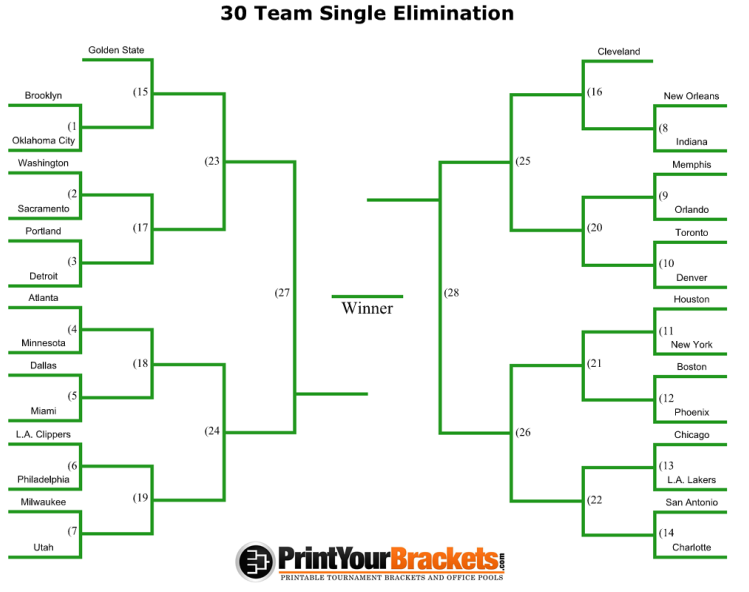 The cross-conference format could lead to some totally unexpected results. Further, the potential of Warriors-Thunder and Cavs-Pelicans games seem enticing.

Another way to do it would be to just have entirely random seeding. You’d have a lot of lucky and unlucky teams, but it would be a lot of fun guessing how it would play out.

#4 Where are the games played?

Play the first round at the arena of the higher seeded team. The seeding would be deterministic from the end of the prior year, so that gives the schedulers time to figure it out. Using two days for the first round (7 games each, because of the bye), most arenas should be able to make one of those days work.

Schedule the remaining rounds in any cities of interest. Choose possible future NBA locations or huge college towns. I bet Seattle would love it. There would be a few stories every year about players going back to their home town or their school, and having extra motivation to do well in the tournament.

#5 How to make the schedule add up?

Here’s where the details get ugly. Really ugly. If you’re not interested, you can skip this part and just trust that I’ve (sort of) figured something out.

The challenge is that teams are going to play one to five (bye teams can only play up to four) games, and how many they play is non-deterministic. Yet we still want every team to play 82 games and have an even share of home and away games.

If we follow the above proposal of having every round after the first hosted in a neutral location, we actually cannot guarantee that an even balance of home and away games will work out. Some teams will play an odd number of neutral games, meaning that their remaining game count is not divisible by two and they will have one more or less home game than away games. If we’re willing to accept this, I’ll explain how we can make the rest of it work out alright.

I propose that the bye teams are scheduled 39 home games and 38 away games, so that if they do lose in either the 2nd round or the semis, they end up with one more home game than away games. Another perk of winning the conference.

In that initial schedule, we reserve dates for these games, and we’ll reserve them all on the same dates. For example, take a Wednesday and a Saturday one week, and a Wednesday and a Saturday from another week. For each team, book the arena for one day in each week, trying to make the Wednesdays and Saturdays add up. These are flex dates where the opponent is (before the tournament) unknown and the game itself is not guaranteed to happen.

If this sounds like a scheduling nightmare for the people creating the NBA schedule, that’s because it is. But it also has one perk for the teams: they can package the extra one or two home games as special events, and sell them after they’ve already put the other games of the season on the market.

#6 How do we make this profitable for all the teams?

There’s a remaining problem that teams now have less home games and thus less ticket revenue. However, as long as total revenue from November Madness exceeds the lost revenue from later games, we can divide it up such that everyone is better off (although just because we can do that does not mean we will do that). Fans get less home games, but also a great tournament to watch.

This entire proposal relies on the assumption that TV ratings would be very high, and that live attendance during the tournament would also be substantial, and that putting these two together can increase total profits. If that is the case, then we can scale the shares by how many home games each team is foregoing, and thus by how far each team survives in the tournament. If the revenues are sufficiently high, we can negotiate a structure such that we can make every team better off, but make the winners even more better off.

There you have it. That’s my proposal. I think it would accomplish a few things:

All of this can be done with only small impacts to the existing NBA schedule, but with huge benefits for the fans and league exposure.