Header image is Loving Nature, Loving Each Other… by Peter Kurdulija used under license CC BY-NC-ND

I have updated the models with newer and more accurate data, and generated fresh predictions. Find them here!

You sure you don’t want the numbers?

Put your pointer right here and press down.

Since I posted my HHOF series [1, 2, 3] in April 2017, we’ve had two excellent classes of entrants to the Hockey Hall of Fame. Showing those inducted as players below, we see a mix of highly accomplished NHL stars, two elite female players, and one Soviet player.

All of the NHL players had high probabilities in the model I demonstrated last year. In particular I highlighted Mark Recchi as a player who was very deserving and I predicted his eventual inclusion in the hall. I also pointed out Andreychuk and Kariya as two stars from the 90’s who had been overlooked. I’m glad to see all of them get recognition now. Teemu Selanne and Martin Brodeur were both certain inductees, and they weren’t required to wait at all. Martin St. Louis was a more than deserving entry, one who I suggested would have been a worthy inclusion in the Top 100 NHL player list.

I have since updated the model. There were two significant motivations for doing so:

This means that we add nine HHOF members to the sample: the aforementioned Dave Andreychuk, along with Ed Belfour, Brett Hull, Brian Leetch, Mario Lemieux, Eric Lindros, Joe Nieuwendyk, Luc Robitaille, and Steve Yzerman. All of these players had >50% probabilities of entering the hall by my 2017 model, with Lindros being by far the lowest at 61.4%.

The new model (using the same variables) performs better, both quantitatively and qualitatively. Its AUC has improved from 0.994 to 0.995, showing that we still have a very effective fit, even with more sample making it harder to overfit. Where it disagrees with reality, fewer of those disagreements seem odd. For example, there are now no eligible players with probabilities over 95% who aren’t in, while last time there were two (aside from Recchi), whose scores have both dropped a little bit.

Now the most notable historical omission is Paul Thompson, who won three cups, and was twice an All Star during the league’s lowest scoring era. He played in the league’s two lowest scoring seasons (1928-29 only had 1.46 goals per game), and across the seasons he played in, the league never averaged more than 2.53 goals per game. We haven’t had a single season as low as 2.53 since 1955-56, let alone a stretch of them. Fun fact, he’s the younger brother of HHOF member Tiny Thompson.

The largest omission in modern times, now that All Star data is fixed, is John LeClair. He was a five time All Star, won a cup, and put up high scoring numbers in a career that directly overlapped with the modern dead puck era. This model probably overrates him a lot, since he played LW, regarded as a less significant position than C, and one where he had less competition for All Star spots. The other 58 eligible players with five All Star berths are all in. Of the 89 with four or more, only LeClair, Carl Brewer, and Rick Martin (whose career ended early) are not in. LeClair’s low point total of 819 weighs against him, and few modern forwards in that range get in. Pavel Bure did, at 779, as did Eric Lindros, at 865, and Peter Forsberg, at 885. Those were all better players with injury-shortened careers. The key point threshold for inclusion is around 1,110.

Next year could go in many directions, since there are no sure-fire NHL candidates. There’s no Martin Brodeur or Teemu Selanne. The most accomplished player might not be an NHLer, since it looks like Hayley Wickenheiser is eligible. This gives the committee a lot of room to reconsider players it overlooked in the past.

Among NHLers, Daniel Alfredsson may have the best case. The model has him at 86% probability. Although he never won a cup (and, as a Leafs fan, I can’t say this bothers me) and was never considered one of the top players in the league, he did win a Calder, and was an All Star once, and stuck around long enough to put up 1,157 points. That only puts him 51st all-time, but almost every player above him is in. The only absence above him on the era-adjusted points list is Pierre Turgeon. Alfie didn’t make it in last year, but has a good shot this year.

Another holdover from last year has a good chance. The model sees Sergei Gonchar as also having a 86% probability of eventually being in the hall. A cup winner and two-time All Star, he put up 811 points over a long career.

It might be time for Alex Mogilny, with 81% probability of eventual entry. He was a cup winner, twice an All Star, and a Lady Byng winner. He put up 1,032 points. This would also be a great year to recognize Keith Tkachuk or someone like Rod Brind’Amour.

Of newly eligible NHL players, Patrik Elias has the best shot, at 78% probability. He won two cups, was an All Star once, and had 1,025 points. He’s followed by Vincent Lecavalier, Dan Boyle, and Brad Richards (all teammates on the 2004 cup winning Tampa Bay Lightning!) who are at 42%, 33%, and 22% eventual likelihood, respectively.

Since Alexander Ovechkin has added a cup and a big pile of points since I’ve last put this together, and his All Star berths are now all counted, he’s launched himself comfortably into the top 10 of all time. Sidney Crosby also rounds up to 100% probability, although with fewer points and many fewer All Star berths, he’s well behind Ovechkin. Other active players like Joe Thornton, Zdeno Chara, Evgeni Malkin, and Marion Hossa are also locks.

Goalies will be tough to determine, since their recognition has historically been inconsistent. It’s hard for me to imagine Roberto Luongo and Henrik Lundqvist not making the hall, but then again, they have zero cup wins and only one Vezina between them. Both of them sit in the 20% range. They might look a bit like Curtis Joseph, who I think should also be in, but who also has low model odds. No goalie has ever made the hall with zero cups, zero Hart wins, one Vezina or less, and two All Star berths or less. 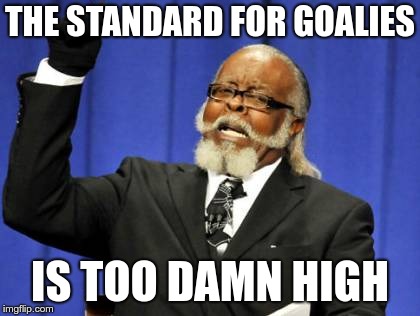 And don’t tell me Hugh Lehman would count. He won the cup before the NHL, not to mention he predates the awards.

And what about our most recent MVP winner, Taylor Hall? He’s just going to have to keep playing, with only a 1.3% chance of making the hall currently. He’s only played 8 years and put up a measly 474 points. However, if he plays another 8 and puts up the same numbers, and earns a second All Star berth, he’ll be sitting at 85%. Given that he just had his best season and another 8 years would only put him at age 34, he has a great chance to exceed those numbers by a lot. Then we can see Hall enter the hall.